Exciting news! At the recent South  West in Bloom Awards Ceremony the Trust was awarded the Monk Trophy for the best use of native plants .

The trophy was first presented in 1986 and previous winners, (names engraved on the back) are all big towns such as Paignton and Plymouth. Pill, last year's winners, and we are the only small communities to win, so we are delighted with this recognition.
The judges rated us as "outstanding" - we're happy with that! 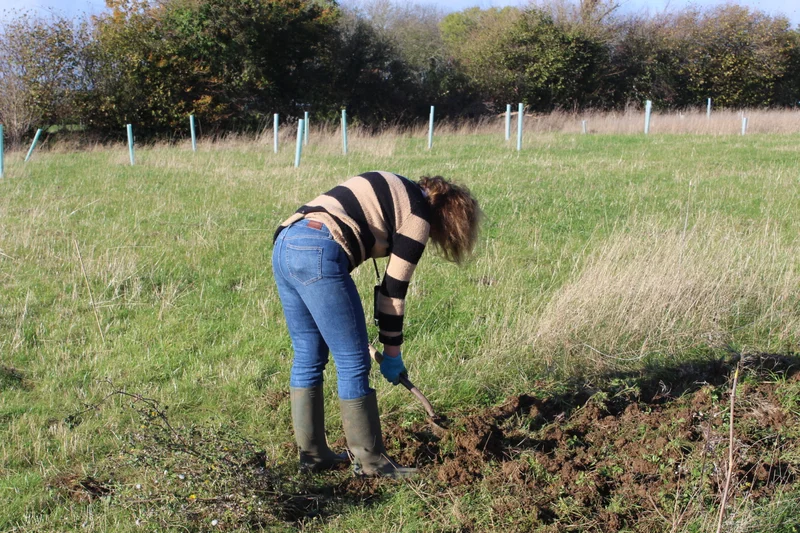 Sylvia working on a test plot
Working on the wildflower meadow test plots has proved problematic -  we  much appreciated Elizabeth and  Katie coming to help, but with only two trustees available and very claggy soil to rotivate with the hand operated tiller suitable for the small area involved , progress has been slow.  Regardless, we have now completed  the three trial plots  and they are again contained by posts and string.  The area of the field containing the plots was mowed recently and the cut grass left on top.  Each plot has three strips within it - the one that had weedkiller applied in the spring has now been rotivated and then seeded with a local wildflower mix, one has now been sclarified (roughed up to expose the soil in places) and seeded and the third has just had the cut grass removed before seed was broadcast on it.
It was interesting to note that the strips with weedkiller had developed a crop of Bristly Oxtongue (Helminthocheca echioides), which is uncommon elsewhere on the field,  with very little else.   To ensure a fair test the different treatments are in different places in the three trial plots - for example, the weedkiller strip is on the left (west) side in plot 1, central in 2 and on the right (east) side in plot 3. The plots are numbered from the west or left hand side of the field as you look from the gate.
We will see the results next summer. 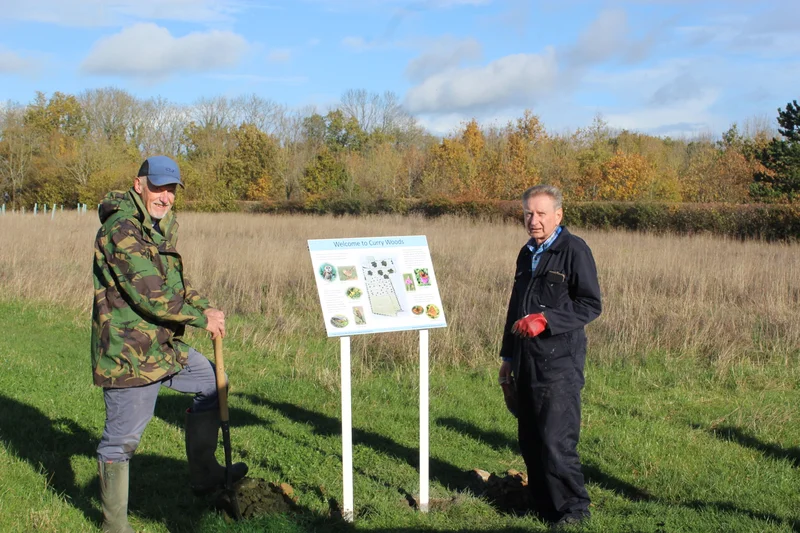 The information board, Paul and Alan

Paul working on a hedgeElsewhere Paul and Alan have been busy - the new information board by the entrance and the neatly trimmed hedges are the result of their labours. read more about these activities in Peter's blog for December :/peter-s-blog/hedges-information-and-an-award
If you are able to help with any tasks, such as protecting saplings or surveying species in the wood, please get in touch!.

The bitterly cold weather has stopped any work at present ! we are lucky that the County Council team were able to improve the footpath in the wood before the ground became frozen. The footpath is now clearly marked and the entrance to it through the mature woodland has been cleared. The stream which developed in wet weather and ran straight down the path has ben routed to the side so the path is now much easier and safer to navigate. Please note the signs take you to the official footpath, which leads down to the Levels - the east-west path along the top is not an official footpath and one of the landowners does not want people to use it on his property. On the subject of signs, we are very pleased to see there is a new sign at the bottom of the lane leading to the CWCT land - clearly naming Hellards Hill Lane. It indicates it is a no-through road but there is plenty of turning space for cars -either in front of the CWCT barrier or the owners of the house at the end of the track are happy for you to turn round on the parking area opposite their gate.

There is growing awareness of how nationally important the Somerset levels and moors are to nature. There are some websites we recommend you look at. Firstly, search super natural nature reserve on www.gov.uk  and you will see that the part of CR parish that lies to the west of Red Hill and encompasses much of West Sedgemoor is now part of a Super National Nature reserve-the Somerset Wetlands National Nature Reserve. The formation of the SNNR was featured on a recent Countryfile programme with an item filmed around Burrowbridge. Six organisations have already pooled their reserves and resources to work together to protect and enhance the biodiversity of an area of 6140 hectares, including the above and much more land in Somerset. Those six organisations are the Environment Agency, Natural England, Somerset Wildlife Trust, The Hawk and Owl Conservancy (including the wildlife and wetlands trust), The Royal Society for the Protection of Birds and the National Trust.  As a young organisation our record in nature conservation is in its infancy, so we have not been invited to be part of the SNNR, but we have been able to join the National Nature Recovery (NNR) network. The SNNR is also part of this of course. The information about the NNR is also on the gov.uk website and we will keep you informed about it as we get to know more.
Meanwhile read Peter's blog about it! /peter-s-blog/strength-in-numbers

Meanwhile, back at base, it has been a very dry summer but we are delighted that most of our trees have survived - and some of those that are "playing dead" at the moment may well surprise us in the spring. We will be able to replace that don't pull through then.

What else has been going on? well, as previously reported there is now a barrier at the gate to the lane - this is to prevent unwanted vehicles on the site but pedestrian access is unimpeded and the barrier can be opened on request or when events are going on. We also have the Trust name on one of the barrier posts so it's obvious where you are! You also won't be able to miss our crane sculpture - brilliantly made by Alan out of the old gate and a few other recycled bits and bobs. Its' eye follows you as you walk past! There is now commemorative bench in the clearing - please treat it with respect. There are plans for more benches in the future.

In the mature woodland things have been happening too! One side of the Trust land is marked with white painted stakes and, near the bottom, a clearing has been designated for an experiment. It has now been fenced off with deer fencing to allow regeneration to take place inside. Frustrating for our (very) friendly deer but their love of new shoots means we have to exclude them! There are plenty more for them close at hand.

Just a reminder -we welcome dogs and encourage owners and their pets to enjoy the area, but please keep your dog on a lead while on Trust land.